The “Arab World” was guest of honor at last year’s Frankfurt Book Fair and the anti-Semitic literature on display – not to mention the participation of a notorious Holocaust denier at the opening ceremonies – caused a bit of controversy. But what a difference a year makes. Matthias Küntzel visited this year’s edition of the fair and found that it was the Islamic Republic of Iran that had the most impressive offering of anti-Semitic classics on display. – JR 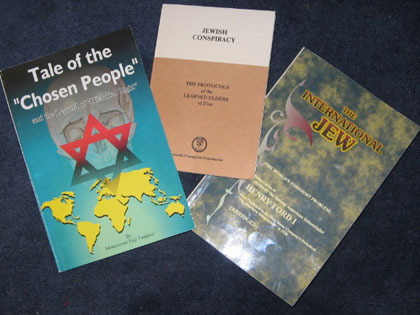 In fact the international publishers in Hall 5 at the Frankfurt Book Fair were not on my program. Having a few minutes before my train was to leave, however, I dropped by and was astonished to see the extent to which Iran was represented in the hall. The Iranian stands seemed to take up as much space as those of all the countries of the Arab League together.

Now, it is well known that the Iranian leadership is dedicated to wiping out the existence of a state member of the United Nations, namely Israel. And it is also well known that to this end, Tehran exports a crude anti-Semitism throughout the world.

Nonetheless, I was astonished how openly this occurred at the Book Fair.

I am not talking about the some hundreds of meters of shelves of Iranian literature that were set up in Hall 5. I am talking about the brochures that Iran presented here in English – not in order to promote the country’s own literature, but rather to disseminate anti-Semitism of European and American provenance.

There was, for instance, under the heading “Jewish Conspiracy”, the text that influenced Hitler’s anti-Semitism like no other work: The “Protocols of the Elders of Zion”, here in an edition published by the “Islamic Propagation Organization” of the Islamic Republic of Iran.

The first pages of the brochure display a map of what is described as “Greater Israel”: an area demarcated in the form of a snake composed of triangles and including large parts of Egypt, Syria, Lebanon, Jordan, and Iraq, as well as part of Turkey and the northern half of Saudi Arabia. Each single triangle, it is explained, symbolizes the “Freemasonry Eye”, a supposed “symbol of Judaism”. On the next pages, the “International Relations Department” of Iran explains the purpose of the publication: “to expose the real visage of this satanic enemy” in order to “awaken the Moslems to this great danger”. Zionism, the authors continue, is a “deadly, cancerous tumor” that must be completely eliminated. A citation from the Ayatollah Khomeini is given to support the killing of Israelis. There then follows a collection of citations, such as “The United Nations is Zionism. It is the Super Government mentioned many times in the Protocols of the Learned Elders of Zion promulgated between 1897 and 1905.” After a call to “Jehad against this menace”, the text of the anti-Semitic tract follows.

A second notorious classic of anti-Semitic literature was also available. A 200-page abridgment of Henry Ford’s The International Jew:The World’s Foremost Problem was presented and sold in Hall 5 of the Frankfurt Book Fair “in the name of Allah the Beneficent, the Merciful”. The publisher of the edition is the “Department of Translation and Publication, Islamic Culture and Relations Organization” of the Islamic Republic of Iran. In the preface, the editor writes:

The grip of the Jewish parasitic influence has been growing stronger and stronger ever since [Henry Ford’s time]. The Jewish danger – now called Zionism – is not only threatening one nation. As a matter of fact, it is directed against the entire humanity.


There then follows Henry Ford’s 1921 screed in a version that was first disseminated in 1970 in Pakistan by the World Muslim Congress. The numerous footnotes added to the text by the Iranian publisher are particularly interesting. We find, for instance, talk of an “expansion of power” of the Jews during the Second World War (p. 39) and of German “resistance” against this “Jewish control” (p. 52). Salman Rushdie is presented as an example of the insidiousness of Jewish calumny. It will be recalled that in 1989 the Iranian head of state Khomeini called on Muslims throughout the world to kill the Indian author, since he was supposed to have insulted Islam in his book The Satanic Verses. An award of 3 million dollars was offered. In 1998, Iranian authorities explained that the Iranian state would not undertake any steps to kill Rushdie. But the Fatwa remained in effect and thus too Khomeini’s appeal to the world’s Muslims.

A third anti-Semitic screed caught my eye during my quick tour of Hall 5 thanks to its garish cover: a red Star of David superimposed on a gray death’s head and a yellow map of the world. It bore the title “Tale of the ‘Chosen People’ and the Legend of ‘Historical Right’”. The volume is written by one Mohammed Taqi Taqipour. The publisher is again the Iranian state. In his preface, the author shows himself to be confident of the victory of his cause: in light of the “global Islamic movement” Israel will soon disappear from the map.

Could it really be the case that nobody else caught sight of these brochures, which could hardly be missed on even just a cursory visit to the Book Fair? What about the employees of the Deutsche Welle or of the German Foreign Office, for instance, who also had stands in Hall 5? They were just a few steps from the Iranian exhibitors. At the Book fair, the Deutsche Welle offered itself as a “bridge to the Islamic World”. The Foreign Office distributed its “Dialogue with the Islamic World” pamphlet, in which one can read: “Peace-building, too, may require dialogue with extremists”.

Did anybody speak with the Iranian exhibitors about their presentation of this Nazi-style anti-Semitism? Or did one – yet again – keep both eyes tightly shut? What does the director of the Book Fair, Jürgen Boos, have to say about the fact that an exhibitor at his fair was disseminating English-language propaganda calling for the elimination of Israel? What consequences will Herr Boos, as well as the German public, draw from this experience with respect to the participation of Iran at the Book Fair in 2006?


Translated from the German by Transatlantic Intelligencer.