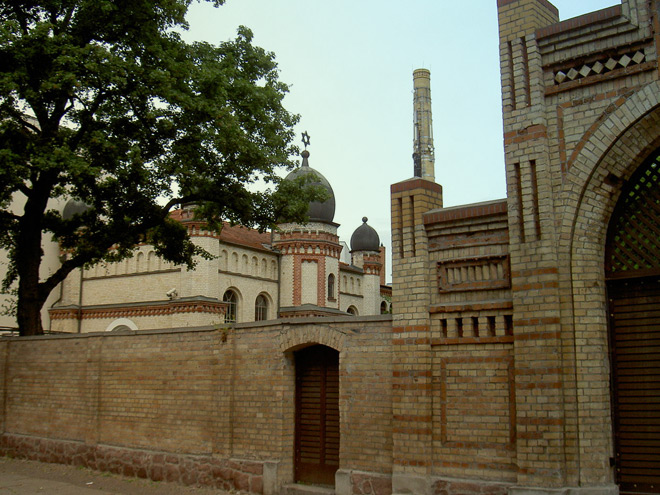 October 2019 was a bad month for Jews in Germany.

On October 5, a knife-wielding man yelling “Allahu akbar” and “fuck Israel” tried to enter the main synagogue in Berlin, albeit unsuccessfully.

On October 9, the worst of post-Holocaust nightmares came true: a neo-Nazi clad in military fatigues and equipped with a helmet camera tried to shoot his way into the synagogue in Halle to massacre Jews. The gunman, identified as 27 year old Stephan Balliet, pushed on the doors of the synagogue, fired several shots at the lock on the door, and stuck an explosive device into a door jam and lit it. However, he couldn’t get in. Instead, he shot and killed two innocent bystanders and seriously injured two others. The manifesto the killer previously published shows that he had purposely chosen Yom Kippur, when the synagogue would be full, as the date of his attack in order to murder as many Jews as possible. It was only the locked door and the synagogue’s security system that saved the lives of the 51 Jews who were praying inside.

On October 24, the World Jewish Congress published a new “Germany Antisemitism Assessment Study,” which showed that more than one quarter of all Germans—27 percent—hold strongly negative views of Jewish people; that almost half—48 percent—believe the old canard of dual loyalty, saying Jews are more loyal to Israel than to Germany; and, that 41 percent of the respondents claim that “Jews talk too much about the Holocaust.”

Finally, on October 27, nearly one in four voters in the eastern state of Thuringia opted for the ultranationalist “Alternative for Germany“ (AfD), led by extreme-right firebrand Björn Höcke who has called for a “180 degree shift” in Germany’s postwar Holocaust remembrance culture. Nearly 260,000 Germans voted in support of a party headed by a man who—in the opinion of the German courts—can be called a “fascist.”

It is therefore a welcome coincidence that in the summer of 2019 the book Das neue Unbehagen: Antisemitismus in Deutschland heute was published. Its two editors, Olaf Glöckner of the Moses Mendelssohn Center for European Jewish Studies at the University of Potsdam and Günther Jikeli of Indiana University in Bloomington are first rate experts in this field.

For them, the events of October 2019 did not come as a surprise: “despite the stated commitment of all government parties to fight antisemitism in any form,” they write in their introduction, “Jews today in Europe and also in Germany are once again scared. They are afraid of verbal and physical attacks. . . . More than a third of European Jews think of emigration. In Germany, too, this option . . . is being considered, and a third of German Jews habitually avoid being recognizable in public as Jews” (7, 8). The anthology they have edited explores these alarming findings in twelve essays by a collection of authors.

Gideon Botsch, in his article on neo-Nazi antisemitism, shows that it would be wrong to trivialize this form of Jew-hatred as “backward looking” or old fashioned since today’s Nazis have adapted their message to new conditions. Botsch cites as an example the use of the keyword “Umvolkung” (population exchange), which refers to the transformation of Western societies through migration perpetrated by malicious anti-national powers. This contemporary neo-Nazism was at work in the attack on the synagogue in Halle. In his video message, the killer criticized feminism and immigration policies, concluding: “the root of all these problems is the Jew.”

Focusing on the left-wing political spectrum, Samuel Salzborn shows in his contribution on “antisemitism and anti-imperialism” that “those actors who represent antisemitism in different left-wing spectra are linked by their anti-imperialist world view.” (41) This world view replaced, according to Salzborn, the class struggles, postulated by Karl Marx, with the concept of suppressed and supressing nations. “In the anti-imperialist worldview, Israel’s defense against Palestinian terrorism has been reinterpreted as a fight against a ‘people’ struggling for liberation.” (45) It therefore seems necessary, he concludes, to “criticize and politically isolate anti-imperialist positions as such.” (47)

Günther Jikeli deals with antisemitism among Muslims in Germany and Europe. He reports on recent surveys within the European Union that show that “antisemitism today is much more prevalent among Muslims than among the general population and that there is a specific Muslim antisemitism.” (50) According to Jikeli, this hatred of Jews has three sources: first, “a hostility toward Jews in religious Islamic texts, including the Koran from the history of Islamic pre-modernism;” second, the “export of antisemitic ideas by European Christians and Nazi Germany;” and, finally “the propaganda of popular Islamist movements such as the Muslim Brotherhood.” (71)

In an essay about the bullying of Jewish pupils at German public schools, Jérôme Lombard shows how this Muslim antisemitism operates in practice. Most of the bullies he discusses are Muslim youngsters who use the Middle East conflict or religion as a reason to attack their Jewish fellow pupils. So far, however, it has been the Jewish students rather than the Muslim students who have had to leave the schools for safety reasons. “If a section of the population feels that they can no longer send their children to the school of their original choice, that means a significant reduction in their quality of life,” (233) writes Lombard.

Stephan Grigat also focuses on Islamic antisemitism, but from a different perspective. He examines the relationship between Germany and Iran and discusses the astonishing fact that Germany is one of the most important Western trading partners of a regime that openly threatens “the state of Shoah survivors and their descendants with annihilation.” (84) According to Grigat, “Germany and the other EU states should follow Canada’s example of 2012 and break off their diplomatic relations with the regime in Tehran until a substantial change has taken place in the country.” (91)

Olaf Glöckner reports on the “hardest test” [Zerreißprobe] (101) of the relationship between the Jewish minority and the non-Jewish majority in Germany since the Shoah: the circumcision debate of 2012. In May of that year, the Cologne district court ruled that the circumcision of boys should be outlawed. This “was a shock no one had expected,” (94) writes Glöckner. Particularly disturbing was the fact that many German doctors and lawyers approved of the decision. Many seized the opportunity, to give free rein to “their fundamental antipathies to the Jewish religion and tradition.” (96) In December 2012, the Bundestag declared circumcision legal. However, the shock waves of this sudden attack on Jewish tradition have continued to reverberate. What came to the surface here was sheer hatred—in no other country has incitement against Jews been perpetrated with such “cutting sharpness, relentless hardness and crude accusation,” (99) stated Dieter Graumann, the President of the Central Council of the Jews in Germany at that time.

Monika Schwarz-Friesel takes a closer look at this emotional dimension of antisemitism, as expressed in the circumcision debate. Antisemitism, she argues, is “constituted cognitively by stereotypes and emotionally by negative feelings,” (119) with “hate” being the dominant emotion. Schwarz-Friesel differentiates between an “affective hatred of the Jews,” (124) characterized by the unfettered expression of aggressiveness, and a “rational hatred of the Jews,” (125) which, although fuelled by the same aggressiveness, is communicatively controlled by hiding its emotional impulse behind “data” and “facts.”

Kai Schubert deals with antisemitism in German media as manifested, for example, in the publication of antisemitic caricatures. Hagen Troschke and Matthias J. Becker write about manifestations of antisemitism on the Internet, while Sergey Lagodinsky analyzes the antisemitic prejudices of German university students, the country’s future elite.

One of the special features of this publication is that it also includes reports from those working in organizations fighting antisemitism on their experiences. Levi Salomon and Jonas Fedders of the “Jewish Forum for Democracy and Against Antisemitism” (JFDA) discuss the feelings among observant Jews that they are “exposed to an omnipresent danger.” (206) They argue that “on the one hand, recognizable antisemitism in Germany has massively increased and, at the same time, public solidarity with Jews has decreased.” (200) Thus, after massive antisemitic street demonstrations in the summer of 2014, the Jewish community “had to call for solidarity with itself—because no one else would.” (204)

The report by Daniel Poensgen and Benjamin Steinitz is also worth reading in this respect. Both are staff members of the Berlin Research and Information Center on Antisemitism (Recherche- und Informationsstelle Antisemitismus, RIAS).

In the past, over 70 percent of antisemitic incidents in Germany have not been reported to the police. The reason is obvious—why should Jews trust the authorities of a society in which almost 50 percent of the population are prejudiced against them? RIAS fills a gap here because it records antisemitic incidents from the perspective of those affected—usually Jews. In 2017, the number of incidents recorded in Berlin alone was 947.

RIAS has three main aims. First, to register and record antisemitic incidents as accurately as possible. These are then categorized in terms of their intensity (extreme violence, assault, threat, property damage, insulting behavior, and mass propaganda) and in relation to the political backgrounds of the perpetrators (far-right, right-wing populist, left-anti-imperialist, Islamist, etc.). Secondly, to provide personal support and advice to the people affected by Jew-hatred. And third, to monitor and report on antisemitic public events, especially in Berlin. Through these activities, RIAS wants to enlighten the non-Jewish majority about the reality and diversity of antisemitism in order to mobilize resistance toward it.

This volume about “the new unease” in Germany provides an excellent overview of contemporary antisemitism in the country. While it testifies to the relatively high level of debate about antisemitism in German-speaking countries, real successes in the fight against antisemitism are, regrettably, hard to find, as dramatically demonstrated in October 2019.