80 Years Later the Echo of the Wannsee Conference Still Exists

My contribution to a Webinar on the subject "80 Years Since Wannsee: An Alarm for Other Genocides?" 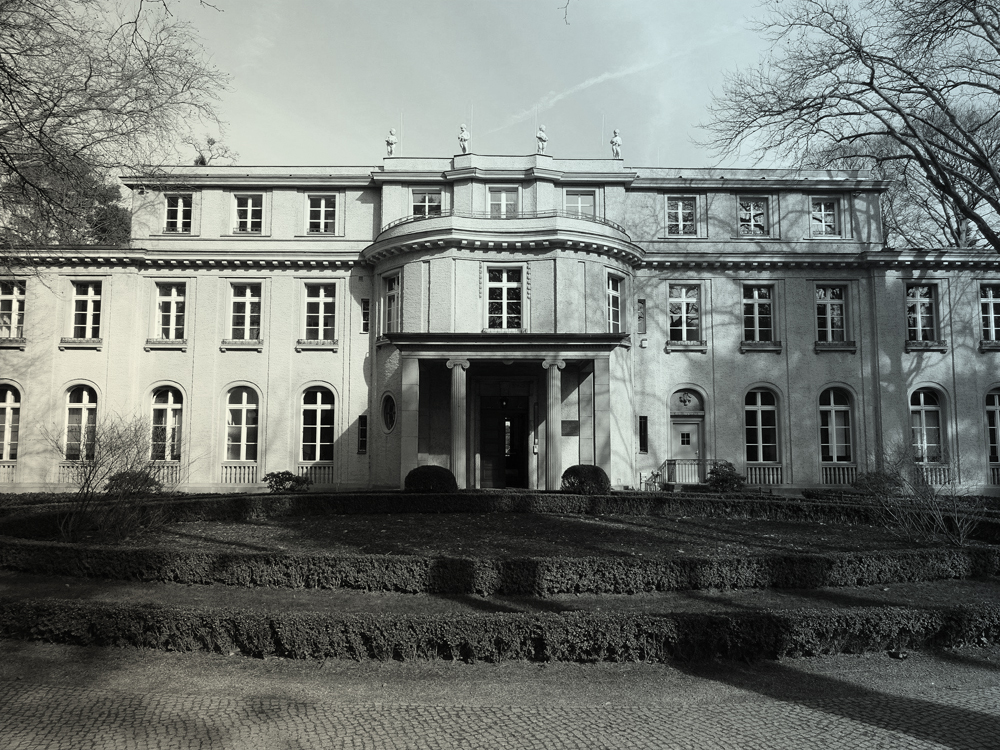 80 years ago, in the House of the Wannsee, the Nazi elite passed a death sentence on millions of European Jews. There, they set in motion the process that would lead to the most brutal mass murder in the history of humanity.

That did not happen in some backwater but in one of the world’s most culturally, technologically, and scientifically advanced society.

Yet our present remembrance of the Wannsee Conference would lose much of its value if it did not also serve to sharpen our attention with regards to the contemporary threats to the Jews.

It is widely known that the protocol of the Wannsee Conference talks about 11 million Jews in Europe who are to be killed. Less well known are the plans for the murder of Jews outside Europe.

A few weeks before the Wannsee Conference Hitler, in a face to face meeting, had promised Amin el-Husseini, the Mufti of Jerusalem, that he also wished to take the earliest opportunity to kill the 700,000 Jews living in North Africa and the Middle East.

A special concern during this meeting was the destruction of Zionism and the annihilation of the Jews in Palestine. In the event, the Allies proved able to defeat the Nazis. However, the idea of thwarting a Jewish state at any cost lived on and found a new home in Egypt, where, after 1945, the Muslim Brotherhood built the world’s largest antisemitic movement. The Brotherhood defended the alliance between el-Husseini and Hitler, declaring in 1946 that,

“This hero [el-Husseini] fought Zionism with the help of Hitler and Germany. Germany and Hitler are gone, but Amin el-Husseini will continue the struggle.”

The Mufti did indeed actively continue the Nazi struggle, playing a crucial role in inspiring the effort by the armies of several Arab states to snuff out the nascent Jewish state of Israel in 1948. Amin el-Husseini embodies the link between the Nazis’ big war against the Jews and the subsequent small war of the Arabs against Israel – a link that is described in detail in my latest book.

As we know, the Arabs too failed to defeat Israel. However, the idea of abolishing the Jewish state lived on. The Muslim Brotherhood passed on the baton to an Iranian cleric named Ruhollah Musavi, who would later become famous under the name Ruhollah Khomeini. Since the revolution led by Khomeini in 1979, Tehran has pursued the aim of destroying Zionism by force.

Focusing on Israel, this regime today pursues the project begun by Hitler and the Mufti. Iranian missiles that are capable of striking Israel bear the slogan “Israel must be wiped from the face of the earth.” The Revolutionary Guards boast that they “will raze the Zionist regime in less than eight minutes”.

An Iranian TV Documentary “7 Minutes to Tel Aviv” shows footage of simulated attacks against key targets in Israel, including the Dimona nuclear reactor, the Knesset, Tel Aviv cultural and shopping centres and business hubs. Iran’s Supreme Guide, Ali Khamenei, has stated that by 2040 at the latest Israel will no longer exist. A countdown clock in Tehran shows the number of days to go before Israel’s appointed end is supposed to come.

Khamenei has even reused a term from the Wannsee Conference Protocol: final solution. Everyone knows what the underlying message of that term is. Khamenei, however, is the first world leader to use it in a positive sense. On his homepage, he promoted in several languages a poster proclaiming “Palestine will be free. The final solution: Resistance until referendum.”

The majority of the Iranian population reject the regime’s hatred of Israel, which is inextricably linked to an antisemitic world view, including Holocaust denial and conspiracy fantasies.

The Iranian regime uses the terms “Zionist” and “International Zionism” in precisely the same way as Hitler used the terms “Jude” and “Weltjudentum” – as the embodiment of evil. From this there follows a dystopian moment in both cases: Just as Hitler’s “German peace” required the extermination of the Jews, so the Iranian leadership’s “Islamic peace” depends on the elimination of Israel.

At this point a remark made by Elie Wiesel comes to mind: When someone says they want to kill you, believe them.

The international community, however, doesn’t want to acknowledge this murderous ambition. It even shrinks back from calling the Iranian regime’s antisemitism by its name. Words, however, matter. They shape our way of thinking and determine our actions.

The term “antisemitic” has a historical dimension. To speak of antisemitism is to recall the Wannsee conference and thus the dangers associated with this monstruous irrationality. It means to mobilize not only our historical knowledge, but also our ongoing historical responsibility.

Eighty years have passed since the Wannsee Conference. The echo of Wannsee, however, still exists, along with the willingness to propagate and prepare for a new genocide. It is our urgent task today to prevent this.

This paper was presented at a Zoom webinar on January 20, 2022 convened by the Henry Jackson Society, The Simon Wiesenthal Centre and the House Of The Wannsee Conference on the subject “80 Years Since Wannsee: An Alarm Call to Warn of Other Genocides?”

Picture: Villa of the Wannseekonferenz